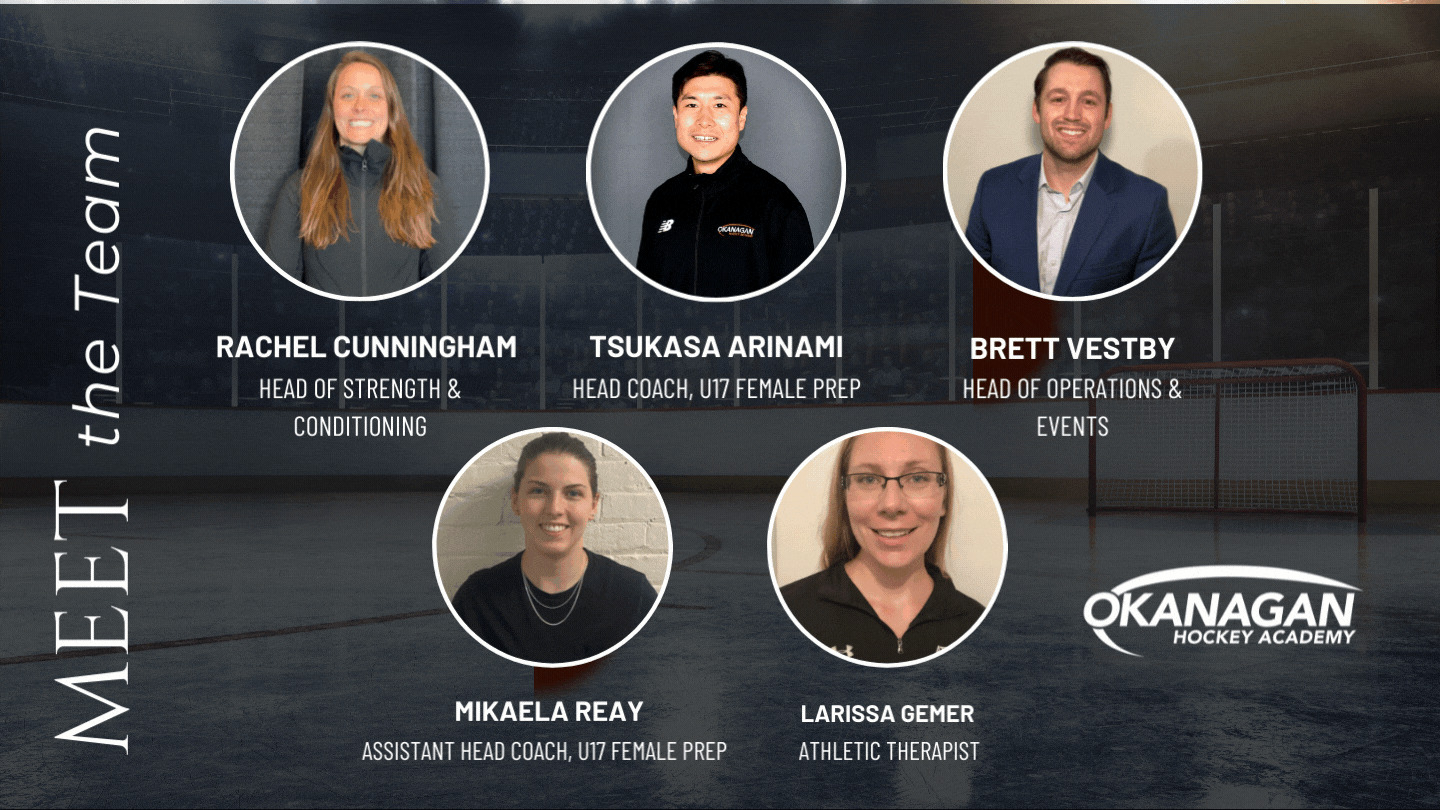 The OHA leadership team will play a critical role in the day to day operations of the Academy and the development of all student-athletes. We’re happy to announce the following leaders will be joining the leadership team alongside Assistant General Manager, Heather Perrin and Head of Player Development, Mike Needham.

Rachel boasts an impressive resume, with a background in Kinesiology and personal training. She has worked in private gyms and Physiotherapy clinics, and from 2009-2013, Rachel was part of Okanagan Hockey Camps program. Rachel attended the University of Southern Maine, where she played Varsity Hockey and earned a Bachelor of Science in Exercise Science. She brings a wealth of knowledge and expertise in fitness, nutrition, and rehabilitation to the role of Head of Strength & Conditioning.

Brett is coming to OHA from Victoria where he has been doing logistical and event planning for BC Hockey as a League Manager. His resume includes such events as Road to the World Junior’s, BC Hockey MML league showcases and championships, Provincial and National Championships. This experience, alongside his degree in Tourism Management majoring in Recreation from Vancouver Island University has prepared Brett to take on the planning and execution of all OHA’s travel, ice and event needs.

“Promoting Tsukasa to the role of Head Coach was a natural choice given his previous two years as an Assistant Coach with the Female Program at OHA.” Scott May

Tsukasa brings a wealth of international experience to OHA. Upon graduating with a Bachelor’s Degree in Sports Management and top European Hockey Coaching Qualifications from Vierumaki (Finland) in 2011, Arinami went on to coach in a number of roles ranging from youth to top female and collegiate programs in Japan and throughout Asia. His additional career highlights include working with female Olympic players from multiple countries, being part of the staff for the University Men’s Japanese National Team Program and other National projects. Arinami has worked as a coach at the IIHF Development camp and has also worked for the 2017 NHL Hockey School in China, where he travelled to different Chinese cities and ran skills camps as part of NHL’s plan to promote hockey in China.

Joining Tsukasa on the bench will be Assistant Coach, Mikaela Reay.

Mikaela played for 4 years (2016-2020) at the University of Lethbridge after completing her high school career in the CSSHL at NAX. Reay’s coaching experience includes working as an Assistant Coach at the U13 & U15 levels as well as working as an Apprentice Coach at the 2022 Alberta Challenge Cup. Since completing her Bachelor of Health Science in Addictions Counselling, Mikaela has been working as a Recruiter and Caseworker with Big Brothers, Big Sisters of Lethbridge, where she has honed her communication skills working with youth from diverse backgrounds. We are excited to bring Mikaela on board to utilize her vast skill set with all of the female student-athletes in our program.

We are excited to announce the newest member of our Athletic Therapy team here at OHA.

Larissa graduated from the University of British Columbia, School of Kinesiology before moving to Ontario to complete an Honours Bachelors of Applied Heath Sciences in Athletic Therapy from Sheridan College. Gemer began interning with high school hockey and football programs in in Wisconsin in 2008 and has continued working with various sports such as hockey, field hockey, soccer, volleyball, and basketball at levels ranging from youth to university since moving to Canada. She has worked multiple seasons with both UBC’s and Toronto Metropolitan University’s (formerly Ryerson University) varsity hockey teams. Larissa is a Certified Athletic Therapist (Canada) and Certified Athletic Trainer (U.S.).