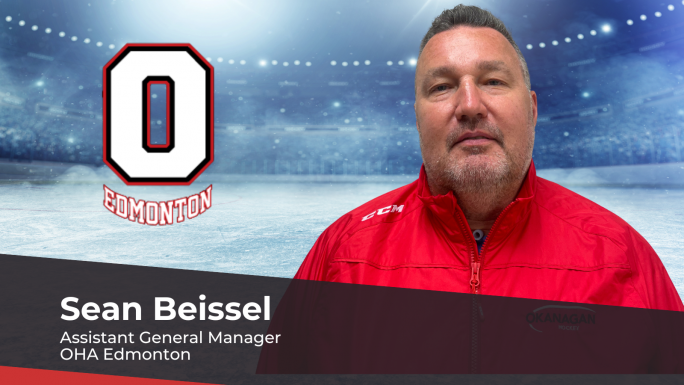 Beissel has been with OHA Edmonton since the inception of the U15 Prep program in 2016. In his time at OHA Edmonton, he has held the role of Head Coach as well as the Director of Operations/Camp Coordinator of the Edmonton Summer Hockey camps in St. Albert.

Sean is Hockey Canada High Performance 2 Certified with a NCCP Chartered Coach Designation and Hockey Canada Skills Coach Designation. He is also a Hockey Alberta Coach Mentor & Evaluator. Beissel won the Silver Medal at the Canada Winter Games in 2015 as well as the Gold Medal with Team Alberta U16 in 2014. He also spent two seasons as the Head Coach of the Fort Saskatchewan Midget AAA team.

Beissel comes to the role of Assistant General Manager with a wealth of experience. Prior to joining OHA Edmonton Sean spent 8 years as the Academic & Athletic Development Director of Operations with the hockey program at Donnan School in Edmonton. Sean also spent 7 seasons as the Director of Hockey Development and Midget AAA Head Coach with the Sherwood Park Kings Athletic Club, as well as four seasons in the Alberta Junior Hockey League in various capacities.

“We are excited to see Sean take on his new role as Assistant GM. Sean has been integral in the growth and success of our program in Edmonton and with his elevated role, we can look forward to delivering a first class experience to our OHA student athletes and their families. We will be leaning on Sean’s experience and dedication to development, to further heighten our program delivery here in Edmonton. Sean’s new role will not only cover select business initiatives but he will be working collaboratively with our staff on all Hockey Operations. ” Randall Weber

Beissel has played an integral role in both the Academy and the Summer Hockey Camps in Edmonton, and his ongoing passion and dedication has played a significant role in the growth of these divisions over the years.

Since the program’s inception, OHA Edmonton has had 44 CHL draft picks & 8 NHL draft picks. The U15 Prep team won the 2018 CSSHL regular season & championship titles. In 2019, U15 Prep won the Bauer Elite & the Rocky Mountain Classics.

With Sean’s expertise and hands on experience with the Edmonton operations, he will play a key role in supporting the GM, increasing operational efficiencies, collaborating between divisions and augmenting the overall experience for our staff and student-athletes alike.

“Having experienced the CSSHL both as a coach and as a parent, provides me with a well-rounded perspective. My daughter played at OHAP prior to moving onto her post-secondary pursuits at NAIT. I am looking forward to taking on this new role within the organization. I welcome an opportunity to further utilize the amazing staff we have in place by building upon the best practices of all our staff with a culture of collaboration. I anticipate my new role will allow the staff to have more time working hand in hand with our student-athletes in the pursuit of their academic & athletic goals.”

If you are interested in learning more about our program for the 2022-2023 season, please contact General Manager, Randall Weber at: RandallWeber@okanaganhockey.com.