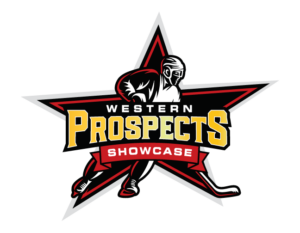 The Western Prospects Showcase is a pre-season showcase and evaluation camp exclusive to players born in 2009. This highly competitive event attracts dedicated individuals, who will be eligible for the 2024 Western Hockey League Prospects Draft. This event allows 2009’s the opportunity to showcase their talents and abilities prior to the 2023-24 hockey season and make that all important “first impression” in front of WHL General Managers, Scouts and Coaches in a high performance, elite environment. Not only will players gain important exposure and experience, but we wish to educate you and your parents on all aspects of junior hockey, and what you can be doing to prepare.

Please note: Applicants should be currently playing at a AAA, AA (Tier 1 & 2) level to be considered. All registrations will be reviewed weekly and we will contact you if there are any questions around your registration.

Staff of the Western Prospects Showcase are all active “Hockey People” from various levels.  Coaches, scouts, managers from Midget ‘AAA’, Junior ‘A’, Major Junior and the National Hockey League have been brought together to share their experiences and conduct this camp. We are pleased that we will provide the same continuity into 2021. Our staff will include coaches, evaluators and support staff during the week.

THE WESTERN PROSPECTS SHOWCASE IS THE ONLY EVENT THAT SHOWCASES ONE SINGLE BIRTH YEAR, PRIOR TO THE WHL PROSPECTS DRAFT, IN FRONT OF WHL SCOUTS.

As you complete your bantam eligibility, you face the opportunity to be selected in the Western Hockey League Prospects Draft. The Western Prospects Showcase will allow you to go head-to-head with other 2007’s from across Western Canada and the United States who are also entering their Bantam Draft year. In previous camps, players have displayed their talents in front of personnel from  Western Hockey League teams. In addition we have seen a variety of scouts, coaches and managers from a number of different leagues, which include Junior ‘A’, Junior ‘B’, Midget ‘AAA’ and Prep Schools.

History indicates there will be scouts in attendance in 2021. There is no other camp that gives one single age group the opportunity to be the complete focus. Western Prospects Showcase staff will provide players our undivided attention and give the opportunity to “show their stuff” against their peers.

Access to WHL Database: compare your results to over 10,000 athletes tested with WHL Combines

Access to Sport Testing Database: compare your results to over 25,000 athletes tested with SportTesting. Use your results to track your development progress, highlight areas of weakness, and target your off-ice/ on-ice training needs